My column in this week’s East Lothian Courier 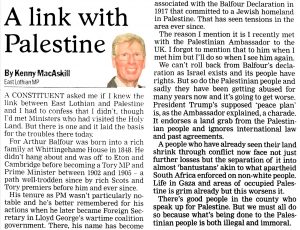 A constituent asked me if I knew the link between East Lothian and Palestine and I had to confess that I didn’t, though I’d met Ministers who had visited the Holy Land. But there is one and it laid the basis for the troubles there today. For Arthur Balfour was born into a rich family at Whittingehame House in 1848. He didn’t hang about and was off to Eton and Cambridge before becoming a Tory MP and Prime Minister between 1902 and 1905 – a path well-trodden since by rich Scots and Tory premiers before him and ever since. His tenure as PM wasn’t particularly notable and he’s better remembered for his actions when he later became Foreign Secretary in Lloyd George’s wartime coalition government. There, his name has become associated with the Balfour Declaration in 1917 that committed to a Jewish homeland in Palestine. That has seen tensions in the area ever since. The reason I mention it is I recently met with the Palestinian Ambassador to the UK. I forgot to mention that to him when I met him but I’ll do so when I see him again. We can’t roll back from Balfour’s declaration as Israel exists and its people have rights. But so do the Palestinian people and sadly they have been getting abused for many years now and it’s going to get worse. President Trump’s supposed ‘peace plan’ is, as the Ambassador explained, a charade. It endorses a land grab from the Palestinian people and ignores international law and past agreements. A people who have already seen their land shrink through conflict now face not just further losses but the separation of it into almost ‘bantustans’ akin to what apartheid South Africa enforced on non-white people. Life in Gaza and areas of occupied Palestine is grim already but this worsens it. There’s good people in the county who speak up for Palestine. But we must all do so because what’s being done to the Palestinian people is both illegal and immoral.