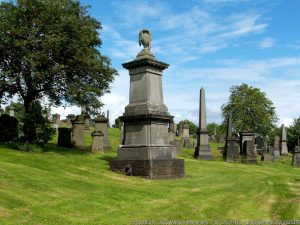 Today is the 200th anniversary of the execution of Andrew Hardie and John Baird, two of the leaders of the 1820 working class rising that became known as the Radical War.

After involvement in the declaration of a National Strike in Glasgow in April of 1820, Hardie and Baird led a small company to march on the Carron Company ironworks, intending to seize weaponry. The Radicals were stopped at Bonnymuir, near Falkirk, and many of the leaders of the movement were captured by the British Army.

Hardie and Baird, as first and second in command, were tried and subsequently executed in Stirling on 8 September 1820. They were hanged, then beheaded – the last such execution to take place. Many others were transported to penal colonies.

The ideas that they fought for are no longer considered radical. Democracy, universal suffrage and the rights of working people are all things that we take for granted now, even as they are increasingly under threat in our Century. Hardie and Baird’s prospectus and their willingness to fight and ultimately die for these ideas underline the importance of these things to Scotland in the 21st century. We must ensure we remember the memory of those that gave their lives for our rights.

As an elected member of parliament in Scotland, I must do what I can to preserve their memory, and so I have laid a motion in the House of Commons to commemorate their deaths 200 years ago today, and to remember the ideals they held firm to the end.  You can read the text of the Early Day Motion here.