TV is our window on the world. We are already forced to watch it through someone else’s lens and now even that’s under attack! It’s time BBC Scotland had a Board that stood up for staff and viewers.

ALBA MP for East Lothian Kenny MacAskill has turned up the heat on BBC Executives over their plans to transfer ownership of two of its studios at Pacific Quay in Glasgow to the Corporation in London and has called in a Commons Motion for powers over Broadcasting to be passed to the Scottish Parliament to prevent this and future power grabs by the BBC.

“These plans are a blatant power grab and effective seizure of BBC Scotland assets and must be stopped in their tracks.

“The best way of ensuring that these jobs are secured and that many more are created in the future is through passing the powers over Broadcasting to the Scottish Parliament.

“These plans which would see BBC Scotland charged in future for using studios which they currently own are a kick in the teeth to the loyal and dedicated staff who work at the studios. They starkly demonstrate what happens when power is exercised by a BBC management and Board remote  from and indeed hostile to the needs of their own employees and licence payers.

“It is unthinkable that a public sector broadcaster accountable to the Scottish Parliament would behave in such a fashion. That is why I am calling on Broadcasting powers to be transferred to Scotland rather than ownership of the BBC studios being passed to London.

“Scottish MPs of all parties should unite to support this call to call time on the BBC’s contemptuous treatment of Scotland, to save vital Scottish jobs and to ensure the fair and balanced coverage which viewers and listeners in Scotland are entitled to receive, something which has been sadly absent in its recent reporting of the Football Euro championships.” 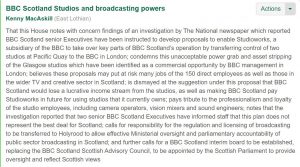