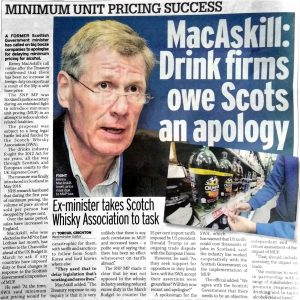 Scotland’s former Justice Secretary has called on big booze companies to apologise for delaying the minimum pricing for alcohol.

Kenny Macaskill’s call comes after the Treasury confirmed that there has been no increase in foreign duty on exports as a result of the 50p a unit base price.

The SNP MP was Scotland’s Justice Secretary during an extended fight to introduce minimum unit pricing (MUP) in an attempt to reduce alcohol-related fatalities.

The proposal was subject to a long legal battle led and funded by the Scotch Whisky Association (SWA).

The drinks industry fought the 2012 Act for six years through the Scottish and European Courts to the UK Supreme Court.

The measure was finally introduced in Scotland in May 2018.

NHS research has found that during the first year of minimum pricing the volume of pure alcohol sold per person has dropped by 3.6 per cent.

Over the same period, sales have increased in England.

MacAskill, who was elected as the MP for East Lothian last month, has written to the Chancellor ahead of the UK budget in March to ask if any countries have imposed duty or fiscal changes in response to the Scottish Government’s imposition of MUP.

He said: “At the time SWA said minimum unit pricing would be catastrophic for them, with tariff and sanctions to follow from South Korea and lord knows where else.”

“They used that to delay legislation that’s working and saves lives.”

MacAskill added: “The Treasury response to my inquiry is that it is very unlikely that there is any such correlation to MUP and increased taxes – a polite way of saying that there has been no effect whatsoever on tariffs abroad.”

The SNP MP made it clear that he was not opposed to the whisky industry seeking reduced excise duty in the March budget to counter the 25 per cent import tariffs imposed by the USA in an ongoing trade dispute with the European Union.

However, he said: “As they seek support for opposition to duty levels here, will the SWA accept their assertions were groundless? Will they now recant and apologise?”

A spokesman for the SWA, which has warned that US tariffs could cost thousands of jobs in Scotland, said the industry has worked cooperatively with the Scottish Government on the implementation of MUP.

The official added: “We agree with the Scottish Government that there needs to be an objective, independent and robust assessment of the impact of MUP.

“That should include assessing the impact on trade.

“We continue to work in partnership with a range of stakeholders to promote responsible drinking and to tackle alcohol-related harm.”