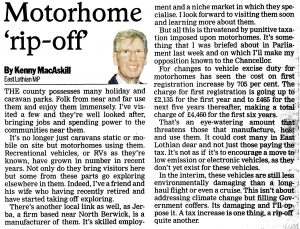 The county possesses many holiday and caravan parks. Folk from near and far use them and enjoy them immensely. I’ve visited a few and they’re well looked after, bringing jobs and spending power to the communities near them.

It’s no longer just caravans static or mobile on site but motorhomes using them. Recreational vehicles or RVs as they’re known have grown in number in recent years. Not only do they bring visitors here but some from these parts go exploring elsewhere in them. Indeed, I’ve a friend and his wife who having recently retired, have commenced taking off exploring in one. Good luck to them.

There’s another local link as well, as Jerba a firm based in North Berwick, is a manufacturer of them. It’s skilled employment and a niche market in which they specialise. I look forward to visiting them soon and learning more about them.

But all this is threatened by punitive taxation imposed upon motorhomes. It’s something that I was briefed about in Parliament last week and on which I’ll make my opposition known to the Chancellor.

That’s an eye-watering amount that threatens those that manufacture them, host them and use them. It could cost many in East Lothian dear and not just those paying the tax. It’s not as if It’s to encourage a move to low emission or electronic vehicles, as they don’t yet exist for these vehicles. A change over to those types of engines is to be encouraged but it’s not available yet.

In the interim these vehicles are still less environmentally damaging than a long-haul flight or even a cruise. This isn’t about addressing climate change but filling Government coffers. Its damaging and I’ll oppose it, supporting local businesses and holidaymakers. A tax increase is one thing, a rip-off quite another.