In my column in the East Lothian Courier this week, I discuss the worrying trend in unemployment, and how that trend looks increase due to the end of the Furlough scheme.

“Unemployment is creeping up, increasing by 180 in July from June. More worryingly, it’s up by 70 for youngsters aged 18-24. The rate of 5.6 per cent is still less than the UK average of 6.3 per cent but everyone is an individual, not a statistic; and it’s pain and suffering for them and their families. Moreover, much employment has been sustained by the jobs furlough scheme and its ending could see unemployment rocket.

“There’s no single solution to the economic costs of coronavirus but retaining the furlough for some sectors is a start. There are jobs where, despite lockdown easing, businesses just can’t reopen. Keeping those skills available and the businesses alive until the situation further eases is essential.

“Investment in infrastructure, by governments at all levels, is also necessary. There’s work to be done in our communities and hands shouldn’t be idle. It’s a no-brainer to pay people to do something useful, rather than having them on benefits and restricted from work. 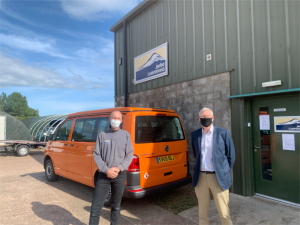 “Despite that, there are still bright spots on the horizon. It was a pleasure meeting a local business in North Berwick, finding out how they were adapting to working under social distancing, to hear they were also recruiting a new apprentice.

“Renewable energy developments off the coast are opportunities, as well as challenges, and I had discussions with developers last week. The scale of the developments on-shore are significant and the villages affected need listened to. Ensuring jobs locally and elsewhere in Scotland follow from it, though, is equally essential.

“But it’s a project of a scale that benefits the entire country and needs seized. It’s also renewable energy, which is essential as we address climate change. The landslip on the A68 showing that it’s not just fires in California or floods in Bangladesh but here that we’re seeing it. Youngsters need work but, even more importantly, they need a planet that’s inhabitable.”