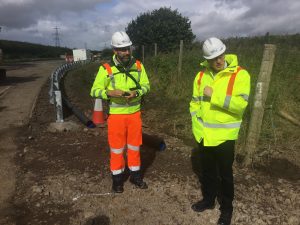 Today I visited the site of the works on the A68 to meet with Bear Scotland officials and see for myself what has been happening following the landslip. I was hugely impressed by the work and was delighted to hear that it seems that the road will reopen on Monday, albeit initially with traffic lights operating at the site.

A double shift on Sunday, including a nightshift, is planned to ensure that asphalting work etc, can be completed. Obviously it will depend on the weather but, hopefully, things look promising.

The slip was significant and came about only 3 days after Bear had taken over the contract for maintenance of the trunk roads from Amey. Thankfully, I discovered that many staff had simply transferred over. The scale of the damage was huge and bringing in rocks was complicated.

The repair also necessitated cabling for utilities being rerouted but with reasonably favourable weather great progress has been made. The works will be an upgrade to seek to avoid any further incidents and improved drainage and reinforced road and side are being built in.

I am aware that heavy lorries and other traffic have been a real issue. I will contact Police and the Council to ensure that further advice on a return to the main route is provided.